Edit
watch 01:33
House of the Dragon Trailer - The Loop
Do you like this video?
Play Sound

The Tyrant
For the surgeon in the episode Autopsy, see Murphy.

For the actor who played Cotter Macklin in The Choice, see Johnathan Murphy

House: "Okay, we started badly. I apologize for the noise, and we will try to figure out a way to be quieter –"
Murphy: "...and a thousand other things I don't give a crap about. Now you keep it down, or we're gonna have trouble."
— House meets his downstairs neighbor

Murpĥy is a resident in Wilson's condo building. He resides directly below Wilson's unit. He appears in the Season 6 episode The Tyrant. He is portrayed by actor David Marciano.

Murphy is a member of the condo's board. Wilson is trying to keep on his good side because he wants the board to approve renovations to their back garden. After House moved in, Murphy started to complain to Wilson about the noise House was making with his cane, and their cooking smells.

House wants to try to soothe things over with Murphy, but Wilson begs him not to. He tells House Murphy is a jerk and because he's a decorated Vietnam veteran who has had his arm amputated, most of the condo's residents put up with him.

House agrees to avoid him, but Murphy confronts him in the condo's lobby about the noise he makes with his cane and threatens him if he doesn't stop.

Wilson admonishes House for interacting with Murphy, but House is suspicious. Murphy was holding a bill for private medical insurance, which meant he didn't get VA benefits. In addition, Murphy, who is a little younger than House, is too young to have served in Vietnam. House had followed up with membership in Vietnam veteran groups, and found no record of him. However, Wilson is unmoved and tells House to write a letter of apology to Murphy.

House obeys, but as he's leaving the letter, Murphy's mail comes out and leaves the door slightly ajar. House is tempted, but leaves the letter behind. However, when he tries to leave, his cane hits some water and he falls. While getting up, the door opens wider and House sees a large Canadian flag hanging on Murphy's wall. He speaks to Murphy's housekeeper and learns Murphy is a Canadian citizen.

Sure that Murphy is faking, House confronts him when he returns to his apartment. After Murphy threatens to have him jailed for going into his apartment, he reveals he was sent to Vietnam by the Canadian military as a peacekeeper and lost his arm trying to save a 12-year old boy from a land mine. He then reveals he suffers from pain in his phantom limb and that it always feels like he's grabbing that boy's arm.

In order to satisfy Murphy and keep him from pressing charges, Wilson agrees to kick House out of the condo.

However, House is not about to be let go so lightly. He manages to really break into Murphy's apartment and, when Murphy arrives, House sedates him with a syringe. When Murphy wakes up he's duct taped to a chair and can't speak through his mouth. House produces a mirror box and places Murphy's amputated right arm in one so it can't be seen and, instead, a mirror image of the left arm appears instead. He instructs Murphy to clench both hands at the same time, then let go. To Murphy's amazement, his pain in 36 years is immediately relieved and he starts crying while thanking House.

Wilson hears from Murphy, who has not only approved the back garden improvements, but has agreed to drop the charges against House even if he doesn't move out. House offers an explanation, but Wilson doesn't want to hear it.

Purpose of the character[]

Murphy is largely present to provide some comic relief to the otherwise serious tone of the episode. It's obvious that his overbearing manner is meant to contrast the real tyrant in the episode, President Dibala who is unfailingly polite with everyone, but this masks his evil nature.

Murphy is also there to be another version of House. The parallels are blatant, including the fact they are both disabled and in chronic pain. When Wilson describes Murphy as a "jerk", its clear that he really means "a bigger jerk than you are".

In addition, in this part of the series, House hasn't overcome his pain, but he has for the moment overcome his addition. Once he learns about Murphy's pain, his diagnostic instincts kick in and he seeks to help in his own way.

Murphy also gives us an opportunity to see what House can be like on his best behavior which, to be fair, doesn't last long. Although House's observational abilities are legendary (see Gregory House and Sherlock Holmes connections), in this particular case his detective skills are wide of the mark, something that never happened to Victorian England's greatest consulting detective. 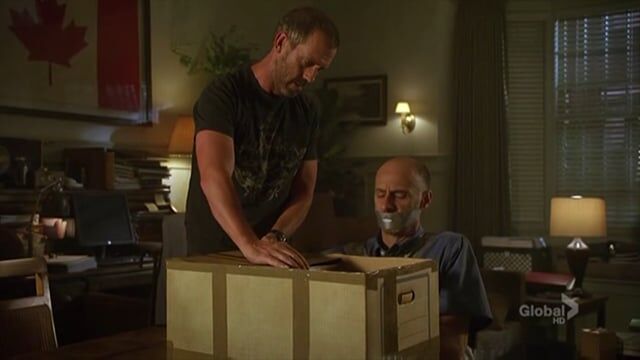 This article was the featured article for December, 2020.