Start a Wiki
watch 01:11
The Loop (TV)
Do you like this video?
Needle in a Haystack 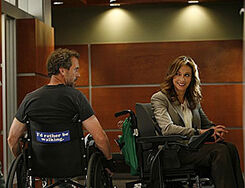 House: "The will may be weak, but my backbone is strong, and pain free now that I’ve stopped using the cane. Of course, it’s harder to look down Cuddy’s shirt, but then the vantage point on her ass is much improved. Again, that’s just me, always looking on the bright side. I‘m the guy who said that her C-cups were half full."
Whitner: "They are nice aren’t they."
House: "Oh no no no no no. You’re not gonna win me over that easily. You may have a wheel, but that doesn’t mean you get the grease. You’ve gotta squeak."
— Needle in a Haystack

Needle in a Haystack is a third season episode of House which first aired on February 6, 2007. The team treats a mysterious patient with an even more mysterious illness. When the facts provided by the patient don’t check out, they find out he is an ethnic Romani who refuses to allow them access to his home out of respect for his parent’s belief that the doctors will pollute it. Things don’t improve when the family show up and insist on using folk remedies. Meanwhile, House loses his parking space to a wheelchair bound physician and bets Cuddy his parking space that he can stay in a wheelchair for an entire week.

While making out with his girlfriend, a teenage boy starts having trouble breathing.

House arrives at work to find his handicapped parking spot has been assigned to someone else. He's been moved just across the parking aisle.

Foreman tries to tell House about the patient, but House is obsessed about getting his parking spot back. However, House's attention is gained when Foreman tells him the young man has a bloody pleural effusion. Chase thinks it is cocaine. House orders a venogram and an environmental scan.

House goes to confront a wheelchair bound doctor about the parking space. She is ready for him. They have an argument. She refuses to back down.

Foreman can't reach the patient's parents. Foreman can't treat him until he gets parental consent. The patient starts having more trouble breathing. Foreman agrees to give him the venogram without parental consent. He finds the patient knows a lot about medicine—he's been studying independently. Neither one can find bleeding in his lungs, which is usually what causes a bloody effusion.

Chase and Cameron go to the patient's home. However, after finding a couple making love in the bedroom, they find out that they are in the wrong house. They go to confront the patient, who says he gave the emergency room the right address. The patient's girlfriend finally tells the team he is Romani (a gypsy), and his parents are out of town. The patient refuses to let them go to his house for cultural reasons. He swears he will tell them the truth.

Meanwhile, House is confronting Cuddy about his parking space. Cuddy is firm—the wheelchair bound doctor needs the space more. They make a bet—Cuddy will give House back his space if he spends a week in a wheelchair.

House's team finds him in the wheelchair. Cameron is aghast by the reason. Foreman thinks it is a deep-vein thrombosis from the patient spending time immobile in the back of a truck. House orders blood thinners so the small leak of blood will become a large one they can find. However, before they start an angiogram, the patient starts having pain in his stomach. They go ahead with the procedure, which shows that blood flow from the liver is totally blocked.

The liver has a total blockage of the hepatic vein. House thinks a mass has formed blocking the vein and orders tests.

The MRI finds a granuloma. However, at that moment, the patient's parents burst in. Foreman convinces them to leave.

House is having fun in his wheelchair, and manages to get both himself and the wheelchair into his car with ease. Foreman thinks it is granulomatosis with polyangiitis (GPA) and he proposes a liver biopsy. However, House recommends immediate treatment with steroids before the liver dies.

Foreman finds the patient with his parents eating their food and wearing the clothes they brought. Foreman argues with the parents about controlling the patient's environment.

House finds Wilson in the washroom. Wilson is not on House's side about the parking spot.

Meanwhile the parents are arguing with the patient's girlfriend. Foreman tries to intervene, but the patient starts suffering bleeding from his groin.

They discuss why he had a perforated bladder even though his liver function is improving . GPA would explain the bleeding, but not why the patient isn't getting better. They would have seen cancer. House suggests immune modulation would help, but it's experimental. However, the parents refuse consent because their people have, in the past, been subject to medical experimentation. Foreman and the parents argue whether blacks or Romani are more discriminated against. However, the parents still refuse treatment.

House and Foreman have a discussion about the case, while he confronts the wheelchair patient in the hall. She agrees with House about how nice Cuddy's breasts are, but House is resistant.

Foreman manages to clear the room of the patient's relatives and explains the risks of the experimental treatment to the patient. The patient agrees to the treatment and to not tell his parents. However, before he can take the pills, he starts having more abdominal pain.

They rush the patient to surgery. The patient’s spleen has ruptured and they find other internal bleeding which is soon fixed. The granuloma turned out to be scar tissue. House wants them to run his bowel, but the surgeon wants to close. House gets out of his wheelchair to run the bowel himself to look for more granulomas. House can't find anything wrong either. The patient's blood pressure starts to drop. House finally lets them close the patient. The patient doesn't have GPA and House admits the experimental treatment would have hurt the patient.

The team can't find a source for the symptoms and the parents won‘t let the team anywhere near the patient. The patient is both bleeding and clotting. House wants to do a colonoscopy despite the fact the patient's bowel was clear, to try to keep ahead of the symptoms. Foreman realizes that since the patient is in intensive care, his parents only have limited access to him and they may be able to get access.

Wilson tells House he is spending the week in a wheelchair for nothing. House makes a deliberate ethnic slur in front of the parents to distract them. Meanwhile, Chase and Foreman do the colonoscopy and find something in the colon—a toothpick. The patient swallowed it while imitating his father, who chews toothpicks as a habit. Usually, the wood from a toothpick will pass through the body. However, during the make-out session, the contortions allowed it to pierce the intestine and pass through the rest of the organs. They couldn't find it in radiology because it had the same density as flesh after absorbing water.

Foreman tells the patient there is a lab internship available in the hospital, but he turns it down—he wants to be with his family. He notes that although Foreman is a great doctor, neither he nor the other doctors on the team are in a relationship.

Cuddy tells House he lost the bet when he got out of his wheelchair to run the patient's bowel. House notes he was only out of the chair for two minutes in a week. He accuses Cuddy of not having had any intention of keeping her word, and lays a guilt trip on her. House then runs into Wilson and asks how guilty Cuddy looks. He says about an eight out of ten and House says that the space is now his.

The patient goes home with his family. Foreman goes home alone. House gets his parking space back.

A young mother presents a son who says his throat hurts. She thinks he's faking it to avoid school. She gave him a choice—school or doctor. House can't find anything wrong with the boy. He threatens to stick him with a syringe filled with saline—painful but harmless. The mother agrees to take him out of the clinic.

Damage from a swallowed foreign object is common, and results in many trips to the emergency room. However, a foreign object that doesn’t show up on radiology is significantly less common.

The patient is portrayed as a very smart home schooled Romani boy who is able to read and interpret his own venogram amongst other things, but somehow didn't connect his severe abdominal pain to the toothpick he knew he swallowed and never passed.

The song playing over the last few closing scenes is In the Waiting Line by Zero 7.

In 1941, author Sherwood Anderson died mysteriously at the age of 64 while heading to South America by ship. After a long investigation, his death was traced to peritonitis caused by a toothpick that had perforated his large intestine. The toothpick was almost certainly swallowed when he gulped down a martini containing olives held together by the toothpick while already intoxicated.

Retrieved from "https://house.fandom.com/wiki/Needle_in_a_Haystack?oldid=56745"
Community content is available under CC-BY-SA unless otherwise noted.