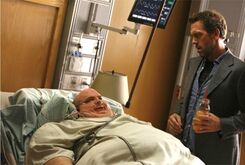 Wilson: "Yeah. I just… I guess I get bored signing it the same way. You know what they say about doctors’ handwritting."
Tritter: "I’m going to give you… a moment… to reconsider… that answer. Because, if you’re, for some reason, mistaken… we will find out, and that will not be good for you, or Doctor House"
Wilson: "I am sure. Absolutely."
— Que Será Será

Que Será Será is a third season episode of House which first aired on November 7, 2006. House deals with a mysteriously ill morbidly obese coma patient. When the patient spontaneously regains consciousness, he refuses any tests that might prove his condition is due to his weight. Meanwhile, Detective Tritter steps up the pressure on House.

Firefighters are removing what they believe to be a deceased morbidly obese man from an apartment building through a hole in the wall. However, despite the fact that he is cold, barely breathing and has fixed and dilated pupils, they detect flatulence and a pulse in his femoral artery.

They bring the patient to Princeton-Plainsboro, where they try to determine why he is comatose. Cuddy advises the team the patient is 46 years old and weighs at least 600 pounds, but otherwise his tests are not only normal, but optimal, including his blood sugar and cholesterol. The team wonders why House is even later than usual.

Of course, House is in jail waiting for bail from his arrest by Detective Tritter. Finally, Wilson shows up with the $15,000 bail. House explains the situation with Tritter to him.

Meanwhile, the team reviews the test results while they wonder where House is. They rule out many possibilities. Finally House shows up and claims he got drunk. House thinks it is Pickwickian syndrome even though his blood gases are normal. House wants a better medical history, so orders the team to speak to people who know the patient.

Foreman and Chase discuss the morality of being obese. Cameron talks to one of the patient's neighbors, but she doesn't know him that well. The patient works as an employment headhunter and loves to cook. Cameron asks about wild game and unpasteurized cheese. It is intimated he uses prostitutes.

Tritter shows up at the hospital. He tells House he has talked to Cuddy. House points out Tritter’s nicotine gum isn't working well and predicts Tritter will go back to smoking very soon.. Tritter isn't impressed.

The team rules out Pickwickian syndrome—the patient is getting worse on the treatment. Cameron points out the patient likes pianos and prostitutes, just like House. House tells them to either treat the patient or find a way to give him an MRI despite the machine's weight limit of 450 pounds. Cameron insists they give him an MRI of his head. They manage to get him on the table, which starts to strain.

Cuddy finds a criminal lawyer for House. She thinks Tritter is serious about charging House with illegal possession of Vicodin.

The MRI doesn't reveal anything. Cameron suggests a lumbar puncture, but the patient suddenly comes out of his coma and starts panicking. The MRI table breaks while they try to get him out of the machine.

The team is still mystified about the coma and why the patient regained consciousness. Cuddy comes in furious about the broken MRI. Cameron takes the blame for breaking the machine, pointing out that House wanted to jump straight into treatment. She argues that obesity is a recognized medical disability, and refusing to treat the patient in the standard way could be cause for a discrimination lawsuit. Cuddy accepts the explanation with a hint of scepticism, but quietly exits the room. The team returns to suggesting treatments, and House decides to go with all of the suggestions, including Chase's suggestion they do nothing. Cameron and Foreman are instructed to perform tests, and House instructs Chase to sit on his ass.

The patient claims to know that he doesn't have hormone, blood pressure or blood sugar problems. He insists he's fine and wants to go home despite the prior coma.

House talks to Wilson about why Cameron is so sympathetic to the patient. Cameron is lying and telling off Cuddy, which is atypical. Wilson reminds House to call the lawyer Cuddy suggested.

The tests on the patient come back normal. They tell House the patient wants to be discharged. House goes to see the patient and tells him it's a bad idea to go home after having a coma. He thinks the patient is hiding a condition he knows about. The patient denies holding anything back.

House gets a phone call that Tritter is searching his home. Tritter comes out triumphantly with 600 capsules of Vicodin and claims House is trafficking. House points out they are all in prescription bottles. Tritter wonders if House ever forged a prescription.

House orders the patient released. Cameron argues that the patient might still have a serious illness and accuses House of putting his personal problems above the patient‘s welfare.

Wilson tells House that he only told Tritter he wrote House's Vicodin prescriptions. Wilson is shocked that House had a stash and once again tells him to call the lawyer.

Cameron escorts the patient out of the hospital. However, as the patient rises out of his wheelchair and starts walking he collapses, breaking a glass panel on the way down. The team discusses the collapse, but Cameron admits she drugged him to keep him from being discharged. House finds out that the patient skipped breakfast and theorizes that the patient has Chagas Disease, which he may have gotten from vegetables from South America. The patient resists the test, which requires a hole being drilled in his head. Cameron warns him about the dangers of the parasite. The patient finally consents.

The team proceeds to drill a hole in the patient's head, but during the procedure the patient goes loses his ability to see and panics, accusing the doctors of blinding him..

The blindness has to be the result of a problem with the patient's brain, but there is no indication of a problem there. In addition, the tests have ruled out an infection or parasite. Cameron doesn’t think it can be diabetes because of the normal blood sugar test, but House wants to do a glucose tolerance test anyway. House excuses himself to go see his lawyer.

The patient resists the glucose test. He's angry about being blind and the doctors believing his illness is related to his weight. He says he’s been fat all his life with no illness and wants a diagnosis that has nothing to do with his weight.

House meets with his lawyer. He tells the lawyer that Tritter is trying to get back at him. The lawyer suggests a plea bargain. House wants to go to trial. The lawyer reveals his fee.

House returns and finds out that the team knows about his legal problems and that the patient doesn't have multiple sclerosis and won‘t take the glucose tolerance test. House confronts the patient again about the test. However, while he struggles with the patient, he notices the patient has clubbed fingers. The team had never touched the fingers and figured it was just fat. House orders tests for lung cancer.

The tests all confirm lung cancer. Cameron breaks the news to the patient—he has small cell lung carcinoma which has metastasisized. He only has a few months to live. George notes he has never smoked and resigns himself to his fate.

House discusses his plea bargain with Cameron. He then asks who in her family had a weight problem. She reminds House she likes damaged people. House guesses it was Cameron who had the weight problem, but she dodges the question.

Tritter meets with Wilson, who confirms House needs the Vicodin. Tritter believes House is injured, but got addicted to the drug. Tritter points out that signatures on some of the prescriptions don't match. Wilson is quietly surprised, but says he signs his name differently sometimes. Tritter asks him to reconsider his answer, but Wilson sticks to his guns.

Even in non-smokers, lung cancer is not uncommon. It is becoming increasingly common in industrialized areas, and New Jersey would certainly qualify on that count.

Retrieved from "https://house.fandom.com/wiki/Que_Ser%C3%A1_Ser%C3%A1?oldid=54394"
Community content is available under CC-BY-SA unless otherwise noted.