Start a Wiki
watch 01:11
The Loop (TV)
Do you like this video?
Resignation 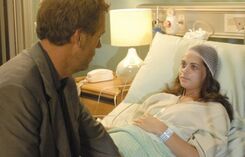 Resignation is a third season episode of House which first aired on May 8, 2007. When a young student comes in coughing up blood, House and the team can only come up with a list of zebras to explain her symptoms, and even worse, all of the possible diagnoses appear to be terminal. However, when House comes to what he thinks is the right answer and finds the patient doesn’t want to hear about it, he realizes they have missed one important symptom that leads in a completely different direction. Meanwhile, Foreman breaks the news of his resignation to the rest of the hospital, and the opening on the team gives House a gambit to get to know a clinic visitor better.

A female college student is sparring in martial arts with a man of similar age. She appears to be winning but she begins to cough up blood and collapses without warning.

At the hospital, House attempts to initiate friendly conversation with his team but is cut off a few times. They are discussing the patient, but can't figure out where the blood came from. House pipes in when the conclusion is arrived that the blood "didn‘t come from anywhere". Cuddy arrives to speak privately with House and Foreman outside the door. House says that Foreman "doesn't want to end up like me". When they re-enter, Foreman announces that he is resigning from his position. Chase attempts to brush it off and continue differential diagnosis. House orders a stress-echocardiogram and an environmental scan.

The patient rides a stationary bicycle to get her heart-rate to 170 where it can be tested. Chase asks Foreman why he's resigning and concludes that he's ashamed of the reason. Foreman admits he doesn't like Chase. When Chase checks the girl, she appears normal - not cold or scared - but inexplicably has goose-bumps on her arm. The team discusses what might be causing the symptoms. House suggests a lung biopsy because he thinks it‘s an infection. Chase asks House why Foreman is leaving and House makes something up. Chase figures that House is ashamed of the reason too. House then visits Wilson to discuss Foreman's resignation and finds Wilson yawning, seemingly for no reason. Wilson says he was just up late.

The doctors meet outside the patient's room and reveal that the lung biopsy test was negative for infection, but she‘s gotten better on antibiotics. The rest of the team thinks she has something else. Foreman cracks a smile at one of House's jokes and Chase believes that Foreman doesn't really want to leave his job - he's trying to be nice to House. House finally admits it may not be an infection and directs his team into her room, where they find she is suffocating from pressure on her lungs and is headed for respiratory arrest.

A pleural puncture is done, showing a pleural effusion, due to heart failure or cirrhosis of the liver. House now is back to thinking it is an infection because of blood in the pleural effusion and orders the dose of antibiotics doubled and an arteriogram.

House gets some amphetamines, but he doesn't take them himself. The arteriogram is normal showing no infection. House thinks it is an infection combined with a missing protein—complement factor H deficiency, which is a terminal diagnosis. There is no specific diagnostic test, but House orders a biopsy of the patient's eye, which is where infections would attack first if she did have the disorder.

The patient is resisting the biopsy, but the doctors assure her it will be painless and that it’s the only thing they can do to find out what is wrong with her.

House grinds the amphetamines into coffee and then offers it to Wilson. Wilson is suspicious because House is being nice, but takes the coffee. House tells Wilson he got a date with a hot woman he met at the clinic. Wilson realizes she is just looking for a job at the hospital. Wilson asks if House has spoken to Foreman about staying.

The macular biopsy is negative, but House still thinks it is an infection. House points out that a positive test would have proven him right, but the negative one doesn't prove him wrong. He allows scans, but tells them to keep an eye out for an infection.

They perform an MRI of the patient's brain. Foreman tells Cameron he's leaving so he won't be like House. Cameron tells Foreman he was already a jerk, and he agrees he is. The MRI is clear, but suddenly the patient starts having a massive headache. They find she is bleeding from a large hole in her scalp.

It is obvious the patient is suffering from massive tissue death, but there is no pus. They discuss whether it is complement factor H deficiency or an autoimmune disease. Steroids will treat the latter, but kill her almost instantly if she has the former. They decide to give her the steroids, with Cameron standing by with defibrillator paddles in case it has an adverse effect. Cuddy confronts House, who is waiting for the patient to have a heart attack. She wants to know if he's spoken to Foreman about staying. The patient suffers no adverse affect from the steroids. House is mildly disappointed at the lack of drama.

Wilson tries to talks to Foreman about being mad at House, but he's too jittery from the amphetamines for a coherent conversation. Wilson leaves to perform a breast exam. During the exam he is still hyperactive and is surprised when he flirts with the patient. He tests his heart rate and finds he is sweating. His heart rate is 185. He realizes House has drugged him. While confronting House he starts yawning. House points out he yawned before and must have some other problem that he wouldn't tell House about. Wilson admits he has a personal problem—clinical depression. He confronts House about depression, saying that House is unwilling to admit to the condition and take meds to help himself, even though he was willing to have electrodes put into his head for the same thing, House challenges Wilson to prove House is depressed and offers to take Wilson’s anti-depressants. Wilson says House has to get an examination before taking anti-depressants. Wilson then asks for a Vicodin to calm down.

House goes home and Cameron wakes him up in the middle of the night by breaking into his house when he didn't answer the phone. She tells him that Chase was wrong about the autoimmune disease—the patient's kidneys have now shut down.

House still thinks he was right about the infection and complement factor H deficiency. He starts to wait for the patient to have a heart attack or stroke. Chase still doesn't think House was right. However, if House is right, Cameron notes the patient is doomed. House is still happy he was right, but still wants to wait for a heart attack before telling the patient the bad news. The patient has a heart attack, but they revive her. Foreman tells House his diagnosis is confirmed. Foreman reminds House he doesn't remember the patient's name, or the names of her parents. House says Foreman doesn't want to quit, but doesn't admit that he wants Foreman to stay. Foreman is angry that House thinks this whole thing is about himself.

House speaks to the patient to tell her she's dying and how the disease will progress. She doesn't want to hear the name of the disease. House is dumbfounded, but doesn't press the issue, but then returns to ask why she doesn't want to know. Her parents try to throw him out, but he persists. The patient says he looks happy about her dying. House catches sight of himself in a reflection and sees himself smiling. He rushes out.

House tells the parents the patient will live and then throws them out. He realized the patient was depressed but not about dying. He thinks she took a capsule of drain cleaner in a suicide attempt, which burned a hole in her small intestine. The intestine healed itself, but not before it bridged an artery with a vein, allowing intestinal bacteria in the vein to spread through the arteries. She only needs surgery, and then a long course of psychotherapy. He asks why she did it, but she doesn't know. She asks him not to tell her parents because they will blame themselves. He says he is ethically bound not to if she promises not to try again. She promises. He reacts with a skeptical "yeah sure".

The surgery proceeds and House still tells the parents about the suicide attempt despite the ethical prohibition. The parents want to know why she hid it. House says it was just a secret. The parents promise to get her into therapy. House suggests medication too. They want to call House if they have questions, but he says no.

Cuddy talks to Foreman about his fear of becoming like House. Cuddy says House isn't all that bad. Foreman doesn't think it is worth the risk.

House meets up with the woman from the clinic at a bar. He admits he isn't considering her for a job. He also reveals all of his character flaws. She is impressed by his forthrightness. He admits he doesn't always tell the truth.

A man comes in with his nutritionist girlfriend, Honey (Perabo) stating his stool is floating when it isn't supposed to. He claims to be on a vegan diet. House accuses the patient of cheating—the stool is full of fat from a hamburger. The girlfriend gets angry at him for eating meat and promptly dumps him.

Nothing in this episode is terribly rare. Suicide is one of the leading causes of death of individuals the patient’s age, and caustic poisoning is a fairly common way of committing suicide. Arterio-venous malformations are similarly common.

And, of course, what could be more common than a bursting skull!

Retrieved from "https://house.fandom.com/wiki/Resignation?oldid=56785"
Community content is available under CC-BY-SA unless otherwise noted.