The fifth season of House premiered on September 16, 2008 and ended on May 11, 2009. The main storylines for this season include the aftermath of Amber's death and how it affects Wilson's relationship with House, Cuddy's search to be a mother, Thirteen discovering that her symptons related to Huntington are getting worse and her new relationship with Foreman, Kutner's shocking and sudden suicide, Cameron's and Chase's relationship going to the next step, Taub's relationship with his wife and House hallucinating with Amber (and later Kutner) due to Vicodin abuse which leads him to make a very important decision.

It began to air in a new time slot from September to December: Tuesday 8/7c. Starting January 19, 2009, House moved to Mondays at 8/7c. Sky1 has taken over the rights to screen the show in the UK airing Sundays at 9pm.

The Hollywood Reporter was the first to go on record that House M.D. would be renewed for a fifth season. Later, FOX Broadcasting Company stated in this Network Prime Time Schedule [1], that House would premiere its fifth Season at 8:00 P.M. EST on September 2, 2008. However, the first episode didn't premiere until two weeks later, September 16.

Although House was originally scheduled to be shown on Tuesdays during Season 5, at mid-Season, the time slots for House and American Idol were switched on the prime time schedule, putting House's new episodes in the 8:00 P.M. EST slot on Mondays.

However, the biggest change in Season 5 was the departure of Kal Penn from the series so he could take a position at the White House. As a result of his sudden departure, his character, Lawrence Kutner was killed off. Although many critics denounced the move as unnecessary and totally unshadowed by the previous episodes, the event led to a series climax when, due to Kutner's death, House descends into psychosis and finally admits himself into a psychiatric hospital to deal with his twin demons of Vicodin and grief.

Wilson slowly starts to recover from Amber's untimely death, but begins to reevaluate his life and to contemplate resigning from his post at the hospital. House's original regret over his role in Amber's death seems to have worn off as instead of being supportive, he merely tries to convince Wilson that he is overreacting to the situation. However, Wilson winds up leaving his post.

House's father dies, and House tries to dodge the funeral, only to have Wilson return as a favor to Cuddy and Blythe House to ensure that House makes it. During the trip, the details of the beginnings of their friendship are revealed. House also reveals that he suspected John House wasn't his biological father and House points out a family friend at the service who House believes really is his father. After they return to Princeton, Wilson realizes he hadn't had this kind of fun since the day Amber died and decides to return to Princeton-Plainsboro.

However, Wilson has to come to terms with another loss - his homeless brother Danny reappears in his life when he is found in New York City. Wilson finds that Danny is now a stranger to him and that the initial incident that led to his disappearance has shaped his behavior in ways only House seems to fully comprehend.

Thirteen has to confront the reality, forced upon her by Amber's death at an early age, that she too is facing a lifetime with a devastating illness. Her behavior quickly starts to deteriorate and she is fired and then re-hired. However, she soon returns to her undisciplined ways. As a result, Foreman begins first to get concerned about her behavior, then starts to feel protective. It soon blooms into a romance, but House feels it is affecting their medical judgement and tries to make them break up.

Cuddy tries to adopt, but after House tries to convince her not to, the adoption falls through anyway. When House tries to show his condolences and Cuddy snaps at him for changing his tune, they embrace and kiss. Wilson realizes that the two are very attracted to each other and attempts to make them confront their feelings. We soon begin to realize that although they are both reluctant to begin a romantic relationship, both want the other to be more involved in their lives.

Cuddy finds another girl to adopt, Rachel. Feeling overwhelmed by both her hospital responsibilities and the demands of a new child, she accepts Wilson's suggestion that she hand over some of her hospital duties to a deputy. To handle the almost full-time job of supervising House, she turns to Cameron, who is incredibly adept at handling her old boss, but soon realizes she isn't up to the challenge on a constant basis and that anyone else would just say "no" to House all the time. Cuddy returns to cover all her duties and starts to make House's life as miserable as possible for keeping her away from her child, including posting signs on the elevator that it is scheduled for maintenance (which it's not) and setting up a trip wire in the doorway or part of his office. She later stops tormenting House when she decides that making his life miserable won't do any good.

House comes to work in a good mood, setting everybody off. Wilson and Foreman conclude that House is taking heroin. Wilson takes House out to dinner and buys him a drink, and after House drinks it, he walks off indignant that Wilson would suspect that he is taking heroin. However, Wilson follows him and finds him puking it up out back by a dumpster, House finally admits he is taking Methadone because it has put an end to the pain in his leg. After threatening to leave if Cuddy won't agree to methadone treatment, he instead goes back to Vicodin because his changed behavior with methadone almost cost a patient his life.

The entire team is shocked and confused when Kutner commits suicide and the whole team is saddened by his loss. House, not wanting to think he couldn't see it coming, reaches the conclusion that it was murder, until he looks through a bunch of photos and finds one showing a lone Kutner with a blank expression - in contrast to the smile he wore in the other photos when he was with other people.

Not long after Kutner's suicide, House develops severe insomnia and begins to hallucinate, seeing visions of Amber. These visions are extremely vivid and allow House a direct line to his own sub-conscious. However, House is soon carrying out actual conversations with Amber to the point where he uses a Bluetooth Headset while at the Hospital so it does not appear he's talking to himself. After subjecting himself to a number of dangerous treatments, the hallucinations are eventually shown to be an obvious and common result of Vicodin abuse.

Chase and Cameron start getting more serious about their relationship. Eventually, Chase plans to propose to Cameron, but when she learns about his plans, she starts making excuses not to go away with him. She finally confesses that she doesn't know what do. Chase proposes anyway, and Cameron finally accepts. Shortly thereafter, House takes over the planning of Chase's bachelor party, hiring a stripper and hosting it at Wilson's apartment. While at the bachelor party, Chase does a body shot off of Karamel, a stripper suggested by the Amber hallucination who was also at Wilson's bachelor party for his third wife. The stripper had used strawberry body butter, and as a result of his strawberry allergy, Chase goes into an anaphylactic shock, and is saved by a medical student with an Epipen. House realizes that he knew about Karamel's body butter and that the his sub-conscious was out to get Chase - the Amber hallucination has become dangerous.

After Chase recovers, he and Cameron continue with their wedding plans. Cameron reveals that she was keeping a frozen sample of her deceased first husband's sperm in case she never found a new person but still wanted to have children. They finally compromise with Chase agreeing she can keep the sample.

House eventually believes he has confessed the hallucinations to Cuddy and that she helped him through the painful withdrawal process. After House dries out, he starts to kiss in her and it was implied that they made love afterwards. The encounter, however, was eventually revealed to be an elaborate hallucination and delusion. As House realizes this, he hallucinates about both Amber and Kutner.

The season ends with alternating shots of Cuddy, Foreman, Taub and Thirteen enjoying Cameron and Chase's wedding and Wilson driving House to a sanatorium, which House willingly enters. 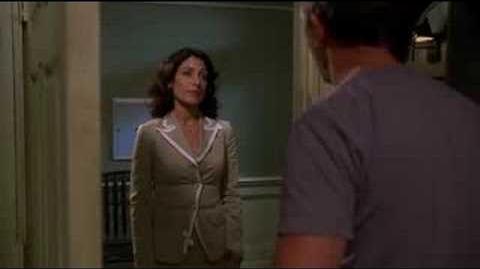