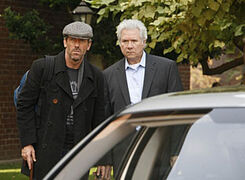 Son of Coma Guy is a third season episode of House which first aired on November 14, 2006.

Wilson finds House relaxing in the room of a vegetative patient. He confronts him about stealing his prescription pad. House brushes it off. The vegetative patient's son comes into the room. All of a sudden, House starts flashing the lights and throws a bag of chips at the son, which hits him. We then see House seemingly disappear, only to appear in front of the son. He tells the son he has a condition that prevents him from seeing things in motion. He noted it the last time the son was there, when he nearly walked into two moving people. All of a sudden, the son has a seizure.

The patient recovers from the seizure, and tells the doctors he suffers from them. Doctors never have been able to find the source. The team does a medical history, but the patient has no surviving family apart from his comatose father. They hand the patient his backpack, and a load of wine falls out.

House realizes that he needs a better medical history. He decides to give L-Dopa to the comatose father to wake him up. His team thinks he is crazy. Cuddy tries to stop House too, but he goes ahead. The father comes back to consciousness and asks for a steak.

Cuddy examines the father, who passes all the mental acuity tests. House starts asking him about his family's medical history. The father is told he's been unconscious for ten years. The last thing he remembers is the fire that killed his wife. He's told his son is seriously ill. He denies any serious medical problems on either side of the family.

Tritter shows up to talk to Cameron. She doesn't want to talk to him, but tells him that House takes six pills of Vicodin a day, but brushes off his allegations. Tritter wonders why Cameron shows him loyalty when House has already let Wilson take a fall.

House goes to the father again, who is getting dressed. The father knows he only has about 24 hours of consciousness, and wants to leave the hospital. House asks him what he has to live for apart from his son. The father says he wants a hoagie [local name for submarine sandwich] that is made only by one place in Atlantic City. House agrees to take him there. He asks for Wilson's car, but the father wants to drive. House convinces Wilson to let him, but Wilson insists on going along.

House wants to know what the factory made. The father made luxury boats. House thinks the son may have been exposed to the paint used to resist mildew. House calls the team to check for mercury poisoning.

Tritter talks to Chase, who says House takes 6-10 pills a day. He admits to writing prescriptions for House. Tritter asks if House asked for or demanded a prescription.

The road trip team gets to Atlantic City, but can't find the hoagie place. Wilson suggests that the father go back to speak to his son. The father is mad that his son is an alcoholic, but that's not why he left as he didn't find out until after they left. The father wants to go to a casino.

Foreman calls House to tell him the mercury test was negative. He orders an echocardiogram. He asks the father to list how everyone in the family died. The deaths are for a number of unrelated reasons, some natural, some accidents. Wilson finally finds the hoagie shop. However, when he tosses the father a soda, he can't catch it.

The father asks why House became a doctor. He points out the fact that House has chosen to work with people when he doesn't like them. He pushes for an honest answer. House tells the story of when he lived in Japan due to his father being stationed there with the Marine Corp. House was 14 at the time and was out rock climbing with a friend from school. His friend fell and was injured. House took him to the hospital and they went in the wrong entrance. Upon entering the hospital he meets the janitor. Later his friend came down with an infection. When the doctors couldn't figure out what was wrong, they called in the janitor, who was a member of a despised minority group, but also a fully trained doctor. When the doctors really had to get the answer to a problem, they had to go to the janitor. House points out that the guy was not part of the staff. He did not fit in. He did not dress well or care that he was not accepted by the hospital administration. But House points out that they needed the janitor (doctor) because he was right. House states "the people that ran the place did not think this guy had anything they wanted, except when they needed him. Because he was right. Which meant that nothing else mattered and they had to listen to him."

So this is how we learn the TRUE reason that Gregory House chose to become a doctor and some of the motives behind his behavior.

House asks the father what happened the night of the fire. The son dropped some a popcorn shaker on some paper, which spread rapidly. The father shows that he is angry he couldn't save his wife and can't save his son. House finally realized that all of the accidental deaths happened at night. The son and the maternal line have MERFF syndrome, a rare genetic condition. House calls Foreman to give him the news, but the son need a new heart and can't be put on the transplant list because of his alcoholism.

MERRF Syndrome is rare, with an incidence of less than 1 in 2,000 people in the general population. Its only obvious symptom, a series of increasingly bad seizures, is common to many diseases. However, it is conceivable that a case could come to House's attention.

As House points out several times, the patient was not in a coma, but was in a persistent vegetative state.

Retrieved from "https://house.fandom.com/wiki/Son_of_Coma_Guy?oldid=16130"
Community content is available under CC-BY-SA unless otherwise noted.