The spine describes the structure made up of the twenty four vertebrae that run up the anterior (back) of the human body from the hips to the head. In addition to these thirteen bones, it is also acts as the primary passage for nerves throughout the body. The vertebrae are separated by cartilage referred to as discs.

In most mammals, the spine is supported on both ends, at the hips and shoulders. As such, there is usually no stress on the spine if the animal is standing still. However, since humans stand upright, the spine is usually under a great deal of stress as it often supports most of the upper half of the body. As such, humans often suffer damage to the discs and the muscles that bind the spine to the rest of the body often become strained and go into spasm.

Damage to the spinal column is usually irreversible because of the many structures that are found within it - literally dozens of different types of cells. Injury usually causes total paralysis below the point of injury. As such, persons who are suspected of having a spinal injury must usually be kept immobile until medical intervention arrives. 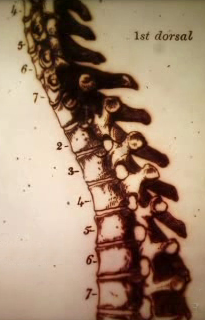 Retrieved from "https://house.fandom.com/wiki/Spine?oldid=45012"
Community content is available under CC-BY-SA unless otherwise noted.