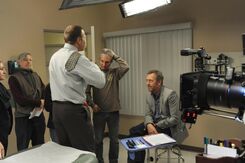 Swan Song is an 8th season episode of House which first aired just before the series finale Everybody Dies on May 21, 2012. It was an hour-long retrospective on the entire series.

This is the quote that Hugh Laurie says at the beginning of the retrospective:

"The ancient Greeks believed that swans only sang once: at the point of their death one beautiful last lament. Well, this is my last swan-like lament."
―House/Hugh Laurie about Swan Song.

After the short and exclusive intro, Hugh Laurie talks about the series, appealing to the nature of his character to say it:

"I'm not saying "House M.D." is the king of TV shows... Wait a minute, no actually I am saying that. But more importantly, if "House" is the king, then the people who make "House" are princes."
―Hugh Laurie

Retrieved from "https://house.fandom.com/wiki/Swan_Song?oldid=54090"
Community content is available under CC-BY-SA unless otherwise noted.