Start a Wiki
watch 01:38
The Loop (TV)
Do you like this video?
Teamwork 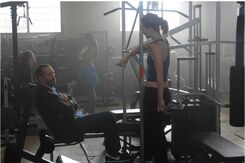 Wilson: "There are a thousand people in the world who want to be on your staff, but you’re going after the four who don’t"
House: "They don’t because their lives are irrelevantly and annoyingly complicated, which makes them confused and makes them make poor decisions"
Wilson: "And your life is simple? You went all the way up to the medical conference to cozy up to Cuddy. Instead, she’s dating one of two people in the world you think of as a friend."
— Teamwork

Teamwork is a 6th season episode of House which first aired on November 16, 2009. After House's medical license is reinstated, he reclaims his role as Head of Diagnostics in time to treat Hank Hardwick, an adult film star admitted to Princeton-Plainsboro Teaching Hospital for pulsating eye pain. At the same time, he plots to get the rest of his team back together. Meanwhile, Cuddy is reminded that Princeton Plainsboro is not conducive to healthy personal relationships, and Cameron and Chase have some news for the team.

An adult film star is rubbing his irritated eye and complaining about a headache to his director. However, when the stage lights come up, he falls to his knees screaming his eyes are exploding. The director calls an ambulance.

Meanwhile, Cameron and Chase are getting ready to go to work. They discuss President Dibala, and Cameron says she can live with it. Chase is relieved, but Cameron says they also need to get out of PPTH.

Foreman is presenting the case of a toddler to House, but he wants to treat the adult film star. However, Foreman is still in charge and he wants to treat the three month old patient. However, Cuddy arrives with House's reinstated medical license. Foreman realizes House is back in charge. Cameron and Chase arrive just in time to announce their resignation. House orders an STD panel, lumbar puncture, medical history, an ANA test and several others, and Foreman has to do them all.

House has gone to see Taub for a consult, and to ask him back on the team. Taub gives him a differential, but shuts House out of his office. House winds up at Thirteen's apartment, and she also shuts the door in his face.

House and Foreman discuss the case. House agrees with Forman that it is cerebral vasculitis and orders steroids and further tests, which again Foreman has to do solo.

House goes to talk to Wilson, and Wilson tells him to go looking for one of the hundreds of people who want to work for him instead of chasing old ones.

Foreman is looking for help from Chase and Cameron, but they aren't sympathetic and suggest that he quit too. However, they finally agree to help out and they start their own differential. They agree to treat him for Vitamin D deficiency as well.

Hank's wife shows up and Cameron obviously disapproves of their lifestyle. Hank stands under ultraviolet light to produce Vitamin D, but he suddenly has a nosebleed and then they notice several hemmorhages on his leg. This means it isn't either Vitamin D deficiency or cerebral vasculitis.

The patient's blood isn't clotting and he has DIC. House rules out sepsis, and is glad Chase & Cameron are back to help. Cameron thinks it might be a blood infection. House orders heparin and antibiotics. He also realizes that Cameron knows about President Dibala. He wants to know why Cameron is staying with Chase, and Cameron suggests that House took this case to get Cameron and Chase to stick around.

Chase tells the patient that what he probably has is contagious. They talk about Chase's commitment to Cameron and the patient says he's committed to his wife as well. Suddenly, Hank is running a fever, which mean the antibiotics aren't working.

House goes to see Taub again and tells him about the case, but Taub doesn't want to come back. House doesn't believe him. They argue and Taub realizes that the antibiotics might not be working if the patient's sinuses were clogged.

Foreman goes to see Thirteen. He's there to ask Thirteen to return to the team, but says he can't keep his work life and personal life separate. She says she can't work with him, but he says that's not true – it was him who had the problem.

House goes to apologize to Chase, who is cleaning out Hank's sinuses. However, he tells him that forgiving Chase is not really in Cameron's character. Chase finishes and starts antibiotics again.

Wilson tells Cuddy that House is stalking his old team. He also asks why Cuddy likes Lucas Douglas. However, when Cuddy gets back to Lucas, he realizes House is getting in the way of their relationship. Cuddy realizes he's right and she apologizes.

Chase asks Cameron why she forgave him. She says that it's because Chase feels guilty about what he did. Suddenly, Hank complains of stomach pain. It's the result of his abdomen filling with fluid and his liver failing. They try to think of a new differential, but they keep ruling out possibilities. Chase suggests it has to be blocked bile channels from sclerosing colingitis. House agrees and tells them to start looking for a liver donor. Chase tells House that Cameron said he forgave him because he feels guilty, but House says it's because Cameron blames House for Dibala's death. He tells Chase he isn't screwing up their relationship, it's already screwed up.

House finds Thirteen at her gym and asks her for a new differential. Thirteen keeps up her exercise and House realizes she's doing it to treat her Huntington's disease. Thirteen wants to know why House hasn't just asked her to come back and realizes that he doesn't want to be rejected.

Chase and Foreman scan Hank's liver and Foreman tells Chase not to listen to House. They find something in the bile duct – the liver is completely filled with strongyloides. They start treatment.

Chase finds Lucas Douglas reading his charts. Lucas compliments Chase on his charts but also notices that he stopped being so precise and complete four weeks before. Lucas wants to know why Chase is leaving and tells him not to run away from his problems. Lucas asks for any dirt on his colleagues.

Suddenly, Hank's lungs fill with fluid and his liver is still failing. The strongoloides might just be a coincidence. They realize he might have a cardiomyopathy, but House rules it out. He agrees with Foreman that it's probably lymphoma and orders chemotherapy. Cameron tells him they are not going to update Thirteen and Taub on the patient.

Chase asks why Cameron is mad at House but not him. He says he would still kill Dibala if he had it to do all over again. He also tells her he's staying at Princeton-Plainsboro. Cameron agrees that he can do that if he wants.

House asks Wilson how he can get his old team to work for him, but Wilson won't help him out. House says he knows that his team is good, but Wilson says he's just comfortable with them. Wilson tells him he might have deeper problems than hiring new people.

Hank starts having blood in his urine and has a cardiac arrest. They manage to stabilize him, but the patient has virtually no red blood cells, white blood cells or platelets. House agrees with Foreman that it is leukemia and orders radiation treatment to wipe out his bone marrow. When his team objects, he tells them to come up with a better idea. He calls to Taub and Thirteen for help. Taub gets a fax and throws it out. Thirteen gets a fax too and lets it slide to the floor ignored.

Cuddy wants to know why House is leaving before noon and why he is destroying his patient's bone marrow. She asks him if it's because of her and Lucas, to which House doesn't answer. Cuddy wants alternatives and House says he does too.

House arrives home and finds Chase waiting for him, telling him he wants to be on the team. House asks him if he thinks that will save his marriage, and Chase says he doesn't know. House says he has four candidates for three spots and doesn't commit.

Hank is taken to get radiation. Thirteen gets the job she was looking for at the community clinic, but instead of celebrating snatches up House's fax. Taub is seeing a patient about her crow's feet, but is more interested in House's fax. House is at the radiation treatment because he thinks it might be wrong. Suddenly Thirteen and Taub call together – it's Crohn's disease. Hank's overprotective upbringing has caused an autoimmune response – the body is attacking healthy cells because it never got the chance to fight anything dangerous. The strongyloides, ironically, suppressed this autoimmune response until they started treating it. House orders methylprednisolone.

Taub comes back and says he wants to be on the team again. House realizes that the excitement of the job keeps Taub from philandering. However, House still won't commit.

Chase tells Cameron he wants to work for House again and asks her to stay too. However, Cameron comes to House and tells him she was in love with him, but she was an idiot. She wanted to be like him so she could help him. However, she realized House had already figured out it was Crohn's and just delayed the diagnosis, and risking the patient’s life to get his old team back. She also says that House did kill Dibala by convincing everyone on his team they could play God. She says that he cared more about getting Taub and Thirteen back than the patient. She tells him that House has ruined Chase – Chase can no longer tell right from wrong. She says she loved both House and Chase and can't stand what they've become – there is no way back for either of them. She offers to shake hands, but instead kisses House goodbye.

Wilson is astounded Chase, Taub and Thirteen are coming back and Cameron is not. House also tells Wilson that Cameron has broken up with Chase and is leaving the hospital.

Hank quickly improves. Foreman sees Thirteen has come back, but still doesn't want to have anything to do with him personally. Rachel Taub comes to grips with Taub's decision. Cameron bids Chase goodbye. House sees Lucas and Cuddy together leaving the hospital.

Crohn’s disease isn’t terribly rare and, though an environment too much clean is considered a possible factor to its onset, is wrong claiming that is its cause because its real cause is still unknown (like for all the autoimmune diseases). It's true that is far more common in the developed world than elsewhere.

Retrieved from "https://house.fandom.com/wiki/Teamwork?oldid=55487"
Community content is available under CC-BY-SA unless otherwise noted.