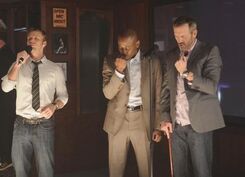 The team takes on the case of an ailing groom-to-be who harbors undisclosed secrets from a previous relationship. As his fiancée (guest star Amurri) tries to get answers to her many questions, a frustrated team winnows down the possibilities. Meanwhile, House spends extra-curricular time with his Princeton Plainsboro colleagues, performing a karaoke rendition of a Gladys Knight & The Pips classic with Foreman and Chase.

As a young couple is getting married, the groom, Ted, suddenly finds himself unable to speak. He then starts clutching at his throat and collapses.

Wilson wakes up next to Sam. Luckily, House is dead to the world in bed, although he starts getting up. He finds himself mysteriously in a young boy's bedroom. He next finds himself in the hands of police asking Wilson if they know him.

House reaches the hospital and finds Cuddy looking for another personal assistant. House admits he has been sleepwalking and was drunk. Cuddy sends him to clinic duty, but Chase intercepts him with Ted's case.

House goes to meet Ted in the emergency room. They say they have ruled out anything that could cause speechlessness and fainting. House asks the patient to turn over and sticks him with a needle. Ted screams, showing he was faking. He claims he wasn't faking, but his fiance believes him.

Taub thinks the patient's symptoms were real, but House dismisses him and also tells him he thinks he's been cheating again because he can't give up the opportunity. Taub says he's already given up his practice, and House tells him he's compensating with sex. He asks House to dinner, but House won't go unless his wife goes too. Taub agrees.

Ted's fiance assures him that she believes him. He tells her that he's ready to get married again. However, when he laughs he starts coughing and collapses again.

House thinks he's faking again, but Foreman has found a pleural effusion. He's obviously not faking this time. However, House wonders why the other two symptoms went away on their own without treatment if they were real. Foreman suggests a systemic disease. House thinks it might be medication. House wants to re-run the tests to make sure the ER did them right and also wants an environmental scan of the patient's old house.

Thirteen breaks into the house and tells Taub that she realizes that he's been with Maya. Thirteen notes the ceiling is suspended and looks above and finds what could be asbestos tiles. Asbestosis would explain the symptoms. Suddenly, the current occupant returns. They reasure him and tell him they're there about Ted. The occupant knows him and wants to know what it's all about. He assures him he had the tiles checked and they have no asbestos. The fellow tells him that Ted used to be his boyfriend.

House confronts the patient, who denies he is gay. He says that the "boyfriend" is gay and had a crush on him. Thirteen asks him why they spent three years together. The patient still denies it was sexual. Taub tells him tha the new infection tests turned up mononucleosis. It is rare in 27 year olds unless they are immunocompromised. They need to test him for HIv. When they threaten to test his fiance, he breaks down and said he may have had sexual contact with the "boyfriend", but he's not gay. He agrees to the test as long as they don't tell the fiance.

Chase and Thirteen discuss Ted's decision to marry a woman. Thirteen thinks its a bad idea and wants to tell the fiance. The HIV test is negative. Although being gay didn't get him sick, Thirteen wonders if trying to be straight did.

Taub shows up for dinner without Rachel, explaining that she's at a class. House has already texted her and she shows up. He tells Taub that he still thinks that he's involved with Maya. Taub admits it and begs House not to tell Rachel. When she arrives, House leaves, but gives Taub a Friday night alibi, a ceramics class, which invites his wife to come along.

The fiance asks why Ted is getting an EEG, but Thirteen tells her to ask Ted. However, the EEG is normal until suddenly Ted has a heart attack. The defibrilate him and stabilize him.

They discuss the possibilties for a heart attack. Taub says he has joined a "full" ceramics class so his wife couldn't come along. Foreman suggests an angiogram and House agrees. Thirteen invites House to a lesbian bar.

House goes to see Wilson. He's realizes that Wilson is getting his team to socialize with him, partly so he can have more time with Sam. He admits he's paying them and he's worried about House's drinking and his relationship with Sam. House agrees to try it.

Ted finally awakes. He lies to Nicole about a previous head trauma. They prep Ted for his angiogram, but he suddenly falls back on his bed. He wakes up again, then falls back down. House quickly diagnoses him with POTS. His blood pressure falls precipitously whenever he sits up, causing him to faint. They hadn't noticed it because they took his blood pressure lying down, when it was normal. However, high blood pressure would explain the heart attack and fainting. House orders fleudricortisone as mononucleosis is a cause.

The "boyfriend" comes to visit, explaining he's an old friend. Ted is still unconscious. He meets the fiance and tells her they had a falling out. He tells her they were roommates for three years after college. When he touches Ted's hand tenderly, the fiance asks him to leave.

Ted starts to improve and regains consciousness. The fiance tells him about the visitor and asks who he is. He tells her they just shared a house. However, he finally admits he got drunk one night and he and the boyfriend had sex. He says it was a mistake - the thought he was gay, but he realized he wasn't. He tells her he was cured and that's what caused the head trauma. However, he starts complaining of a headache.

Taub thinks the headaches might be a cerebral infection. House orders a lumbar puncture.

House goes to the lesbian bar with Thirteen. She's flirting with the other patrons. House asks about the bartender, but Thirteen says she's straight. House reminds her she was wrong about the patient. She says its because he came in with a woman. She believes he loves his fiance, but will still want to have sex with men. When House points out Taub wants to have sex with other women, Thirteen says that's different. House gets a call that the lumber puncture was negative, but the headaches are getting worse. This rules out POTS. However, House puts the worsening headaches down to leaking CSF from the lumbar puncture. Chase says that wouldn't explain the original headache. However, if his CSF was lot to begin with, it would cause both POTS and a headache. He orders them to find the lead and transfuse CSF.

Chase treats the CSF leak. However, Ted suddenly has what appears to be a stroke. However, his pupils remain responsive and he responds to questions, although with slurred speech.

The new symptom clearly rules out POTS and a transient ischemic attack is ruled out, as is sarcoidosis. House figures the answer must be somewhere in the medical history, which is untrustworthy. He wants to get Ted, his fiance, and the boyfriend in the same room to question them. Taub is opposed but House figures its the only way to get at the truth. Chase asks House out, along with Foreman. Neither wants to do it, but they have both taken money from Wilson. House agrees to go.

Thirteen starts the medical history. When they start talking about blackouts, the boyfriend tells of one that Ted had that Ted put down to being drunk. The fiance admits that Ted has ocassional erectile dysfunction, but Ted thinks that's normal. However, the boyfriend says it was never a problem. However, the erectile dysfunction could be a vascular problem. The patient agrees to a test that measures blood flow through the penis. They offer him a choice of gay or straight porn and threaten to give him a shot if he does't get an erection on his own. The patient wants the shot.

Chase is doing karaoke, with Foreman and House accompanying. No one wants to follow them and they make a toast to Wilson.

The patient's test goes fine, but he feels like he is sweating. However, he's really lactating.

The lactation indicates a problem with his thyroid. It is unlikely to be the hormones he received as male hormones don't cause lactation and he hasn't received any in three months. Taub thinks it might be a pituitary adenoma. House orders a test of Ted's prolactin level and an MRI of his pituitary.

Wilson asks if House had fun, and he said he realizes Chase and Foreman could be his friends, but they he sobered up. When Wilson starts talking about change, House realizes something.

The pituitary MRI was normal, but House already knew that. House puts pressure on Ted's neck, and he feels relief, until House releases the pressure. House has realizes the patient has a Chiari malformation, a congenital narrowing at the base of the skull that cut off CSF flow. It wasn't a problem until the electro-confulsive therapy caused his brain to swell just enough to cut off the opening. The brain also pressed against his pituitary, causing the other symptoms. Treating him for POTS actually made it worse.

The boyfriend comes to visit again. Ted tells him he's not coming back to him, but the boyfriend is more concerned about the fiance. He leaves and wishes Ted luck. The fiance sees him leave. Ted starts talking about the wedding again, but she is now harboring doubts. He tells her love is all that matters, but she still thinks she loves the old boyfriend. Ted says he's made his choice, but Nicole says she has to make a choice as well and leaves.

House finds Taub, who lets him have the napkin rings he bought to try to fake the ceramic class. He goes back to patch things up with his wife.

Cuddy tells House she has a new personal assistant. She congratulates House on his diagnosis, but House says he's going home to nothing. Cuddy invites House out. She denies Wilson is involved, and points out Lucas is working late. House says no, but Cuddy says she just wants to be friends. House says that's the last thing he wants them to be. After Cuddy leaves, he rubs his leg and looks at his ibuprofen. Instead, he grabs a bottle of whiskey from his desk and proceeds to drink from it.

Retrieved from "https://house.fandom.com/wiki/The_Choice?oldid=16309"
Community content is available under CC-BY-SA unless otherwise noted.