Start a Wiki
watch 01:11
The Loop (TV)
Do you like this video?
The Right Stuff 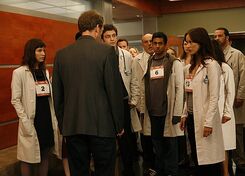 The Right Stuff is a fourth season episode of House which first aired on October 2, 2007. House runs a reality show style contest to choose a new diagnostic team. While giving his new applicants an exercise, a prospective astronaut approaches him to treat her “under the table” to keep NASA from finding out anything is wrong with her. When Cuddy finds out about the arrangement, she demands that House properly chart every single procedure. When the patient refuses to consent to any test that would make NASA suspicious, House has to get even more creative than usual. However, he’s distracted by what appear to be familiar faces around the hospital.

A pilot named Greta Cooper starts hallucinating while in a flight simulator.

Meanwhile, House is testing a room of forty doctors known as The Applicants. He shows a picture of Buddy Ebsen and tells them about his allergic reaction to his Tin Man makeup and instructs the interviewees to come up with alternative diagnoses. When Cuddy tells him he doesn't have the budget to temporarily retain forty doctors, he arbitrarily fires a row of ten of them to bring himself back under budget. When he realizes that he fired a row with an attractive woman, he then rehires the row and fires a different row. House's pager then rings, but it shows his own number.

The pilot is in his office. She offers him $50,000 in cash to find out what is wrong with her. She tells him that she's due to go to NASA's astronaut training but if they find out about her condition, they will ground her. She tells House that she started to hear with her eyes.

House tells his applicants they're going to do a diagnosis without keeping notes or records. He then introduces the patient, who is given the code name "Osama bin Laden". The applicants start questioning her about her synesthesia. One applicant guesses the patient frequently flies and may have an embolism. House then orders a group of applicants to do a whole bunch of tasks.

House assigns some spare applicants to wash his car. One of them says that she thinks that House is planning to fire them and leaves along with some others. Only one continues to wash the car. The applicant who said she thought the students were wasting their time returns and says she just did that to get others to leave. She steals House's car keys to take the car to a car wash.

Meanwhile, some other applicants are trying to break into the patient's house to do an environmental scan. An older applicant finds a better way to get into the house - he lies to the landlord.

Another applicant tells House that the patient has elevated red blood cells. House glances out his office window and sees who he believes is Chase. The car wash applicants return and House orders them to put the patient in a hyperbaric chamber as he thinks it might be carbon monoxide poisoning. The car wash applicant also lets the others know she still has her old job and is working both of them. Suddenly the patient goes into cardiac arrest. One of the applicants uses a defibrillator on her. He gets the patient's heart beating, but starts a fire in the oxygen rich environment. One doctor on the scene figures they will get fired.

The patient is put on nitroglycerine and blood thinners. They start discussing new diagnoses, including Lupus. House sends three applicants to do a transesophageal echocardiogram, and gives the rest busy-work looking for possible sources of infection in the cafeteria.

The applicants do the echocardiogram on the patient's heart but find no abnormalities. House orders a test for hypothyroidism, even though it might cause another heart attack. During the test, the patient starts suffering from symptoms unrelated to the test, including the hallucinations she had in the simulator. She runs out of the room having a psychotic break. House is paged when she locks herself in a room, otherwise security will know she's in the hospital. One of the applicants threatens to blab her secret, and when House says he knows it, she bursts out of the room. House thinks he sees Cameron. Cuddy comes along and sees them with the patient and wonders who she is. They tell her it's Osama bin Laden.

Cuddy goes to the applicants and asks who the patient is. One of the nineteen remaining applicants knows who she is from examining her home and reveals her identity. Cuddy tells House to keep a chart on her. House fires the guy who ratted. He goes back to the diagnosis. He fires another applicant for tattling as well. He tells the applicants they can't test the patient any more because there would be records.

House tells Wilson he saw Cameron. He also asks how to scan a liver without scanning it. Wilson blows him off on both counts. He thinks House is hallucinating and he will next see an African American Cameron with blonde hair. Wilson informs House that Cameron is with Chase in Arizona, and they just called him. Wilson thinks House is getting ready to choose people he doesn't like, because if he likes them he will care for them and he might end up getting hurt.

House tells the applicants they have to stress the patient's liver. He fires one applicant for snitching on another, then re-hires him when he suggests giving the patient alcohol. He also convinces a Mormon applicant to act as a control subject, over his objections to drinking alcohol.

They give tequila to the patient and the control subjects (including House himself). He discusses religion with the Mormon, and why he fell for a logical argument. The Mormon brands House as an atheist. House thinks he sees Foreman. Suddenly the patient has trouble breathing. House is chasing Foreman. Cuddy tells House Foreman is at New York Mercy Hospital. She realizes House has been drinking. He returns to the patient's room, but she is missing. The applicants took her to a treadmill to give her oxygen—records will show merely a routine stress test rather than an emergency. House starts to percuss the patient's chest, listening for abnormalities. He figures it's lung cancer or tuberous sclerosis and he wants to do an open lung biopsy. The patient refuses, as NASA will know about it.

House says they need to give the patient the surgery. The plastic surgeon in the crowd can't hide the scars, but he suggests breast augmentation as a cover story—they can do the biopsy during the operation and there will be an explanation for the scars. The patient eventually agrees. Cuddy confronts House about the reason he's doing such a surgery, but backs down when he threatens to tell her what is really going on and suggests an oversight committee would hand down penalties. They do a biopsy during the augmentation and find a number of cysts. They start discussing diagnoses in the operating room. Suddenly Chase appears on the observation deck with the answer - Von Hippel-Lindau syndrome [1]. House wonders if he is hallucinating, but the applicants confirm he is there. Chase tells him he's now on the surgical staff. The applicants ask if House will hire Chase instead, but when House looks questioningly up at Chase, he quietly shakes his head no. House then affirms he'll hire from the applicants.

House and Wilson argue about Wilson not letting House know that Chase and Cameron are back at the hospital in new jobs. However, Foreman really is at New York Mercy.

They tell the patient she's fine for now, but the syndrome will affect her for the rest of her life. House tells the patient he has already informed NASA, but they don’t seem to care.

House picks ten applicants to stay. One rejected applicant who said she did nothing wrong confronts House, but he tells her that she didn't take any risks. He tells the oldest applicant that he knows he never went to medical school, but agrees to keep him on as an personal assistant to give advice.

House goes to see the now blonde Cameron. He thinks she's wasting her time in the ER. She admits she gave the patient House’s pager number. She asks why House ratted out the patient, but he admits he didn't—he just said he did to keep the others from doing it. Cameron thinks he did it because he couldn’t kill the patient’s dream.

Retrieved from "https://house.fandom.com/wiki/The_Right_Stuff?oldid=56277"
Community content is available under CC-BY-SA unless otherwise noted.