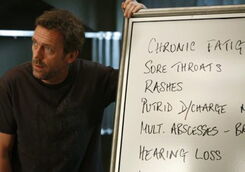 Top Secret is a third season episode of House which first aired on March 27, 2007. When House has a dream about being in combat, he wakes up only to have Cuddy assign him the case of a Marine whom House just saw in his dream. Certain that he has seen the man before, he spends more time trying to learn where he could have possibly met him than he does treating the patient. Meanwhile, Cameron and Chase’s sexual relationship starts to get riskier.

Retrieved from "https://house.fandom.com/wiki/Top_Secret?oldid=57645"
Community content is available under CC-BY-SA unless otherwise noted.