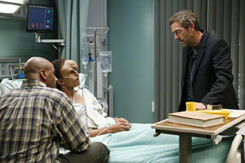 Cuddy: "It’s difficult not to be moved."
House: "Oh stop it. Suddenly I don’t think I can trust Michael Moore movies."
Cuddy: "Where are you going? Kittens to get out of trees? Deaf kids to read to?"
— Ugly

Ugly is a fourth season episode of House which first aired on November 13, 2007. A documentary crew follows a young man through surgery to correct his severe facial deformity. However, when the man becomes too sick to operate upon, the crew turns its attention to the diagnostic process and House doesn’t appreciate the publicity. When Cuddy insists, House goes out of his way to ditch the documentarians and keep his applicants focused on the case. Taub thinks House is just trying to keep the patient from getting his reconstruction surgery, and openly defies him. Although House is angry, he‘s also intrigued, and he begins to wonder why a successful plastic surgeon is competing for a fellowship position. Meanwhile, House worries that he is overestimating the abilities of the female applicants he finds attractive, and fears he must fire both Samira Terzi and Thirteen, but one of them proves she’s as smart as House thought she was.

A documentary film crew follows a man with a serious facial disfiguration in order to make a film about his reconstructive surgery. Just before they start operating, Chase talks to the documentary crew about the surgery, but suddenly the patient's heart rate rises and he starts to defibrillate and is soon in cardiac arrest. They manage to use the defibrillator to revive him, but they can‘t stabilize his heart beat. They have to fit him with a pacemaker wire.

Cuddy talks to House in front of the documentary camera about the case. Chase explains the case, but House reminds him that he knows what Chase is talking about because he's a doctor. House takes the case and goes to leave. The documentary crew follows House, much to his amazement and annoyance. He slams the door in on the camera. Cuddy admonishes him for his actions. She wants the PR. House thinks the objectivity of his team will be compromised. Cuddy tells him the documentary crew is paying the patient's medical costs and will not pay for the patient‘s surgery unless they have access. House reluctantly agrees, then makes fun of Cuddy on camera.

The applicants talk to Samira in the lecture hall, asking her if she is competing for their jobs. Amber thinks that there will be only one vacancy, with Samira and Foreman getting the other two. House arrives and takes the applicants to the MRI room, where the metal camera cannot follow, and informs them of the case. Amber wants to know why he hired Samira. He tells her that she has experience in diagnostic medicine. They do a differential. House thinks the patient has been inhaling Freon to get high. He orders a nuclear study to see if there is scarring of the heart. Samira wonders if her job is firm and House confirms she has been hired.

House visits Wilson, concerned about a mistake Samira made which he ignored. He feels he made a mistake hiring her but can't just turn around and fire her. Wilson is astounded that he has a conscience about it and figures she must be really good looking.

Taub convinces the patient's father that the patient might be doing drugs and that's why they want to do the test. Kutner tells the patient he had trouble in school too, but then feels bad about trying to draw comparisons.

House and his team hide from the documentary crew in an operating room. They report the patient's heart is normal. Taub thinks it is intra-cranial pressure. Cuddy is with the documentary crew, covering for House‘s avoidance of the camera. House orders an EP study when Cuddy comes looking for him.

Taub explains to the patient that he will catheterize his heart to test it electrically. Taub talks about how being different is hard before he realizes how stupid he sounds. He's tells the patient it is okay to admit he's using drugs, so they can help him. The patient admits taking drugs, but Taub realizes he's lying. Taub plans to cancel the EP study. Suddenly, the patient starts coughing and can't breathe.

The team discusses the patient vomiting blood. House notices his team is now dressed up and/or wearing makeup. House likes only Samira's idea, but Foreman shoots it down. Cole comes up with a workable idea, and Taub backs down on intra-cranial pressure before the camera. When he leaves he tells Cole he didn't want to back down, he just didn't want to look bad on camera. Taub reassures the father even though he knows that the procedure could cause the patient to bleed to death.

Wilson goofs around for the camera, telling the crew that House is a Wiccan. House comes in and throws out the camera crew. He tells Wilson that Samira did something stupid again. Wilson tells him to ask her out. House is paged—the patient is vomiting blood again. It turns out Taub was right about liver failure. House agrees he was wrong, but says Taub is also about intracranial pressure. No one comes up with a diagnosis. Samira makes another suggestion that Foreman shoots down. Thirteen suggests a mitochondrial disorder, and House agrees to test for it.

The documentary crew films Cameron, asking her about how House treats his fellows and why she left. She blurts out that she loves House, but then backtracks and says she loved working with him.

Amber tries to scan the patient's his eyes with a machine he cannot fit his head into. Taub steps in with the good old standby of using a handheld scope. He spots swelling, but no degeneration of the retina. Taub still thinks he is right about intracranial pressure, but House attributes the swelling to the patient's facial deformity. Taub backs down again and agrees to treat the patient for juvenile rheumatoid arthritis even though the steroids will delay his reconstructive surgery for months. However, when he goes to the father, he says he thinks House is wrong and he can get House thrown off the case.

The father refuses steroids and House realizes it was due to Taub. House fires him and Cuddy agrees, but tells Taub not to leave until the case is over because of the publicity and because Taub is the only person the father trusts. Cuddy tells House to do a CT Scan to confirm arthritis, then he can treat the patient with steroids.

Foreman tells Taub he isn't out if he can redeem himself. Taub tells Foreman that the reason he's concerned about the patient is that as a plastic surgeon he sees how the patient could be.

Meanwhile, House talks to Taub's former associate, claiming he needs surgery but really trying to dig out why Taub left a successful practice. The plastic surgeon lets it drop that it was due to personal issues, rather than professional ones. When the surgeon's suspicions are aroused, House admits he was digging and leaves. He then goes back to Taub to argue about the diagnosis and the results of the CT Scan. He embarrasses Taub in front of the camera about buying a diamond for his wife and a fake story that he lost a patient. When they get some privacy, Taub admits he had to quit when his partners found out that he was sleeping around with the nurses. When they come back out, Cuddy tells House he was right and tells Taub to stay away from the family, and for House to stay away from Taub's family.

House visits the patient to tell him he needs steroids. The father wants to see Taub, but House tells them that Taub was only worried about doing the reconstruction surgery, which the patient doesn't need. The patient says he does need the surgery—he can't have relationships and conversations the way he looks, even with his father. House reminds him the surgery will only change his face, not who his face made him.

Wilson and House break into the film room to watch Samira tape diagnoses. Wilson agrees that Samira doesn't know what she's talking about. Wilson reminds House that he's just a guy, one who has fallen for a pretty face rather than smarts. House reminds him that Cameron was smart, but Wilson starts to doubt that.

Cameron practices her lines clarifying how she "loves" House in front of a mirror with Chase watching.

Taub tells House the patient has a lesion in his head. House agrees, and it means they can proceed with the reconstructive surgery. However, House notices the patient's little finger is twitching, and realizes his diagnosis was wrong. He orders the surgery cancelled again.

House discusses the twitching finger with the team. Although the patient is improving with steroids, there must be something else wrong with him. Taub accuses House of trying to find something wrong with the patient so they can't do the surgery. Taub suggests removing the pacemaker. House thinks the patient will have a cardiac arrest and brings Kutner along to defibrillate if necessary. The pacemaker is removed without incident.

However, House is not satisfied and stands next to the whiteboard bouncing his ball.

They prep for the surgery again. Thirteen is there because she thinks there is still something wrong with the patient, just because House does. Suddenly, she sees something when comparing his current appearance with photos shot of his head several weeks prior—a discoloration near his hairline.

Wilson tells House that he hires beautiful women because he's incapable of having a relationship, firing them and then asking them out. Suddenly Thirteen shows up saying it is Lyme disease, a disease she suggested earlier but which House rejected because the patient didn't have a rash (less than 50% have the rash, the rash appears only several weeks after the tick bite and disappears after awhile anyways, so it was wrong to dismiss lyme disease just based on that). She says the discoloration is evidence of the telltale target-like rash, a theory which is confirmed once the patient's hair is shaved.

House tells the camera that people are attracted to beauty and are repulsed by ugliness. He refuses to answer whether he resents Cuddy interfering with his practice.

House asks Taub why he signed a non-compete agreement, which prevents him from having a plastic surgery practice. He says he did it to shut his former partners up so they wouldn't tell his wife about his infidelity. House tells him he isn't fired. He turns to Samira and fires her instead, telling her he prejudged her unfairly, then he asks her out. She walks out giving him a major stink-eye.

House sees a first cut of the film, which is edited to make him look like a caring doctor. He's appalled, making a barely audible comment, "The horror..." a nod to Joseph Conrad's Heart of Darkness . Cuddy cries fake tears to make fun of him and asks him if he's off to treat orphans. House says he's going to stop the distribution of the film.

The patient is shown in the film, his facial reconstruction surgery complete, and he thanks House.

Lyme disease isn’t common, but isn’t rare in New Jersey either. It’s endemic wherever ticks are found, which includes most of the suburban, rural and wilderness areas of the state.

Retrieved from "https://house.fandom.com/wiki/Ugly?oldid=57483"
Community content is available under CC-BY-SA unless otherwise noted.