Start a Wiki
watch 01:38
The Loop (TV)
Do you like this video?
Unplanned Parenthood 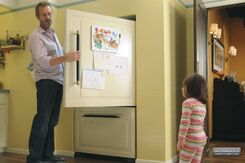 Unplanned Parenthood is a 7th season episode of House which first aired on October 18, 2010. House is given his first opportunity to babysit Rachel Cuddy, while at the same time managing a case of a sick newborn. Meanwhile, Taub and Foreman are on the hunt for a new female fellow to fill in for Thirteen.

A woman in labor is just about to give birth. The newborn appears and the attending nurse tells them to get the emergency team because the baby is hypoxic. More and more doctors come into the room and they ask the woman’s daughter to turn off the video camera.

House comes in and tells the team they have to stay late. He tells them the patient is only eight hours old and has problems with her lungs and liver. Cuddy comes in and tells House they have to speak in private. They go into his office and tell him that he needs him to babysit Rachel. House wants to stay and treat the baby, but Cuddy reminds him about his promise to get a woman to fill in for Thirteen. House figures he will get more sex out of it and agrees to drop by at 7 p.m. House goes back to his team and tells them to treat the liver. He tells Foreman to stay behind. He apologizes for letting Chase pick Thirteen’s replacement. Foreman is ahead of him and has been interviewing all week - he has two candidates.

House goes to Cuddy’s house, but Cuddy keeps calling back to check in on Rachel. House pretends to check. Cuddy hangs up and he goes to the fridge looking for more food. He drinks orange juice from the bottle, then finds Rachel standing in the kitchen. She says she’s thirsty and asks for juice. House tells her to go back to bed. House calls Wilson to join him.

Taub is doing an ultrasound. It doesn’t look like an abcess, but dilated bile ducts. They call House who is trying to lull Rachel to sleep. Foreman tries to introduce the new fellow, Dr. Christina Fraser. House fires her. They’re incredulous, but House is doing it to just put Foreman in his place. He gives Taub the opportunity to hire someone. House wants to perform surgery to correct the problem with the bile ducts despite the fact she has a bleeding disorder as well.

Wilson arrives with food. House says he’s leaving. Wilson goes to stop him and threatens to leave. House thinks he’s bluffing and leaves. Wilson chases him, leaving Rachel alone. Wilson starts his car. House starts his motorcycle. Wilson threatens to go back in and hire a babysitter, then call Cuddy. They both agree to stay. However, they return to find Rachel has trashed the living room. She also has something in her mouth - a quarter. They realize she has swallowed a coin.

They perform surgery on the newborn. Taub’s suggestion for a new fellow, Dr. Cheng, makes an excellent suggestion to bring the patient’s blood pressure back up - epinephrine. It works and they continue. However they can’t find any obstruction, but the patient’s blood pressure keeps dropping and they have to stop. They leave surgery and discuss the blood pressure problem. They come up with a diagnosis and call House for approval. Chase tells Taub to forget about Dr. Cheng - House will shoot down anyone they propose because he doesn’t want to hire anyone. Taub suggests getting House to think it’s his idea.

House is wondering why Rachel opened up a bag of Chinese food just to go at the coins. Wilson figures out how much change was in the bag and a dime is missing. House has been using a fridge magnet to look for the coin, but Wilson reminds him that American dimes aren’t ferromagnetic. House figures it will just pass, but Wilson realizes it might cause an obstruction and kill her. Wilson says they have to tell Cuddy, but House is dead set against it. When Wilson threatens to tell, House tries to blackmail him. Wilson tells him he has to either monitor Rachel or tell Cuddy, then ducks out through the window. Cuddy arrives home and House tells her she’s fine except she woke up once. House offers to stay the night.

The mother discusses her relationship with the older daughter with Taub. Taub notices the patient is more pink. He lets the mother hold her.

Taub finds Dr. Cheng and tells her that the newborn probably just had a blood vessel malformation. Cheng proceeds with an x-ray on her patient. He talks to her about the job with House and she’s enthusiastic.

House is lying awake. When he hears Rachel make a noise, he’s up like a shot. He checks her diaper, but there’s no coin. Cuddy is standing there asking if everything is okay. He says everything is fine and Cuddy goes back to bed.

In the morning, Cuddy gets ready for work, but House says he’s going to sleep in because his case at the hospital is under control. The nanny arrives and House gets a call from his team. They tell him to check his messages - they didn’t do the surgery. However, Taub gives Cheng the credit for spotting the vascular malformation. However, House doesn’t think that’s the whole story and calls Dr. Cheng an idiot. Taub tries to blame Foreman, who tells House that they treated her for it, and she got better. House figures she’s going to crash again and tells them to call him back when she does.

The mother is cradling the patient and talks to her daughter, who thinks she’s treating the baby better than she treated her growing up. She thinks the baby has just wet itself, but instead they find she is bleeding.

Meanwhile, House and Wilson bring a sleeping Rachel to the hospital. She wakes up just as they start the ultrasound. Taub calls House, who has to step away from the ultrasound because it’s interfering with his cell phone. He grabs a land line instead. Taub tell him about the bleeding, but Wilson distracts him to show him the dime on the ultrasound. As they argue about it, Taub pounds on the door of the exam room. House finally goes out to meet him and tells him that Wilson has a patient in a lot of pain. Rachel starts laughing and House says Wilson’s bedside manner is that good. House tells him to focus on why she got better, then worse. He ducks out to see Rachel again. Luckily, the dime is in the large intestine and the danger is likely over. House thinks of something, catches up to Taub, and tells him to do a direct blood transfusion between the mother and patient.

The patient improves markedly. They realize the original transfusion they gave the patient from the mother is why she got better, but House still has no idea why the baby has improved.

Taub calls over Dr. Cheng to help with the differential. House thinks she’s not going to help, but she helps House realize that the mother’s blood either has something special in it, or it’s just regular blood and the baby has a deficiency. House decides to try Taub as the next donor to see if that works. House tells Cheng to come with him. House gives her a test - Rachel’s case. She suggests going in with a scope to remove the obstruction.

House finds Wilson and Rachel in the men’s room. House tells Wilson about the scope idea. Wilson says it’s too dangerous, but House argues the dime is dangerous too. They try to figure out how to get the opportunity without Cuddy finding out. Finally, House asks for Wilson’s dosimeter. He takes it and exposes it to large amounts of ultraviolet light.

Taub’s blood isn’t helping, so they figure that the baby has an infection and the mother has antibodies to fight it. The mother says she had another baby so late in life to have the opportunity to be a special mother.

The dosimeter is handed in and alerts radiology that there might be a radiation leak. Cuddy comes in to tell House about the problem. House has scratched off Wilson’s name so they can’t trace it to him. She says she has to work late, and House “reluctantly” agrees.

They take a biopsy of the baby’s liver and find a melanoma. The mother has inadvertently given her baby cancer. Taub examines the mother and finds the melanoma under the nail of her index finger. However, House is more concerned about why the mother, who must have late stage cancer that has mestasticized, seems so healthy. Foreman knows the answer too - something in the mother’s immune system is fighting something else and the melanoma is being affected as well. Since autoimmune diseases can have that effect, House orders tests.

The mother is blaming herself for making the baby sick. The daughter wonders what it could be if it isn’t an autoimmune disease, but Taub is evasive. The daughter apologizes for the thinks she said to her mother earlier. She admits to being jealous, and tells her she was a great mom.

All the tests are coming out negative. Cheng tells Taub that House is okay with hiring her, but left the decision up to him. Taub thinks he’s being set up. Cheng agrees with him. They rule out autoimmune and start looking for infections that cause granulomas.

Wilson is on “poop watch”, but has had no luck. House says it’s time for the scope and gets the equipment for it.

The scans for granulomas are coming out negative. Foreman tells Taub to stop over thinking the matter and tells him that Cheng seems to be the only candidate House cares about. As they continue the scans, they also find out the mother has lung cancer too.

They break the news to the mother. Ironically, the immune response to the lung cancer suppressed the melanoma, which is why she didn’t show symptoms. It also explained why the baby got better during the transfusion. She needs surgery and chemotherapy, but the baby only needs chemotherapy. The mother wants to continue the transfusions, but they won’t work after the surgery. The mother wants to put off the surgery. Dr. Foreman says the cancer is unlikely to spread, but clots could form. The mother insists on waiting. The daughter objects and thinks the mother is only doing it because she feels guilty about the way she raised her. However, the mother insists.

House shows up with more Chinese food and complains they left out his pancakes. They realize the previous night’s order may have been screwed up as well. When they calculate the amount, there is no missing change and they realize that Rachel didn’t have access to an extra dime. They realize the “dime” on the ultrasound was only air, like House thought. They sit down for dinner.

The daughter arrives in the room to find the mother unconscious. She calls for help. However, the mother has passed away from a pulmonary embolism, caused by the clotting Foreman was afraid about. They realize that they will be able to harvest her blood to treat the baby. Taub offers Cheng the job, but she turns him down - she tells Taub he’s an ass too, acting like a paranoid kid.

Foreman finds the daughter with her newborn sister, telling her about her mother.

House and Cuddy are sleeping. Rachel’s baby monitor wakes them up and House tells Cuddy it’s her turn. She removes Rachel’s diaper and finds a dime. When she asks Rachel how she got it, Rachel says “House”.

Retrieved from "https://house.fandom.com/wiki/Unplanned_Parenthood?oldid=16317"
Community content is available under CC-BY-SA unless otherwise noted.