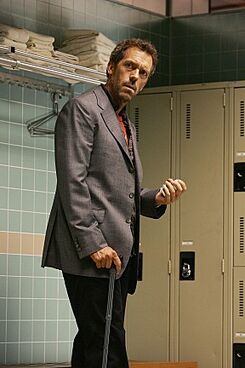 Wilson: "House, get out of here. Get out of here!"
House: "You are not going to make me feel guilty about what Tritter is doing to us."
Wilson: "You already feel guilty. Your mysterious shoulder pain isn't coming from your cane, it's coming from your conscience. That used to be enough. Despite all your smart ass remarks I knew you gave a damn. This time, you were either going to help me through this or you weren’t. I got my answer."
— Whac-A-Mole

Whac-A-Mole is a third season episode of House which first aired on November 21, 2006. The team treats a young man who is the guardian of his younger siblings. When they treat him, he keeps developing new infections. Meanwhile, Tritter is putting pressure on Wilson to rat out House.

While working at a pizza place, a young man vomits before collapsing and clutching his chest; he's having a heart attack. The paramedics defibrilate him and learn he is the guardian of two younger children: his brother and sister.

Meanwhile, Tritter has arranged for Wilson's car to be impounded.

The team start discussing the patient, who was recently orphaned by his parents' death. The patient is still vomiting despite anti-emetic therapy. House lets them run one test for their diagnoses as he writes his down and seals it in an envelope.

Wilson meets his lawyer. The lawyer tells him that he has to give the police what they want. House is probably going to jail, and if Wilson keeps lying, he will be going with him.

The team discuss the patient and what test they are going to run.

The patient is still trying to keep control of his siblings despite his condition. House comes in to see the patient about one of his symptoms: his itchy feet. The patient freely talks about his drug history in front of his siblings. House wonders if they are truly honest with each other.

Foreman proceeds to do an MRI on the patient. House questions the patient and notes the patient lost his taste for cigarettes, which is why he quit. Cameron does an angiogram and presses the patient to stress him for the test. The patient doesn't react adversely.

After using public transport, Wilson finally gets to work and explains his problems to Cuddy. He finds out all his narcotic prescriptions are bouncing back because the DEA has suspended his privileges.

Chase's blood tests are negative. At that point, House reveals what he knew all along—the patient has Hepatitis A. Wilson comes in to tell House his narcotic privileges have been suspended. He asks House to assign one of the fellows to do his prescriptions. They open the sealed envelope, but it doesn’t contain the hepatitis A diagnosis; instead, it contains a prediction on which tests the team would run, and House was 100% correct.

The patient improves on immunoglobulin, and they plan to release him the next morning. However, the patient's brother notices that his arm is bleeding, and the bleeding soon spreads to his ears and nose.

The Hepatitis A is gone, but there is a new problem: DIC. They guess it might be something at the pizza place, but no one else is sick. Wilson comes to get Cameron to cover his prescriptions. House orders them to find the patient's vomit from his workplace.

House asks Chase for a Vicodin prescription. Chase refuses and tells House he would rather lose his job than his license.

Wilson goes over his patient's prescription needs with Cameron. However, Cameron is reluctant to just rubber stamp Wilson's requests.

Chase goes to find the vomit and finds himself dumpster diving.

Wilson and Cameron meet with one of his patients. The patient wants to know why Cameron is there.

Foreman does a lumbar puncture on the patient. He accepts some assistance from the patient's sister. She is worried he is going to die. She tells Foreman her father died while drinking and driving. Foreman assures her that her brother is not that bad off. However, when they move the patient on his back, his rib breaks. House believes it is osteomyelitis. Foreman refuses to give House Vicodin too.

House's physiotherapist Lorraine is treating his right shoulder and puts him a sling and gives him a standard issue cane. House and Foreman go tell Cameron and Chase to stop testing for infections because the osteomyelitis rules out toxins and infections. However, they do find him positive for syphilis and another infection. House tells the team to keep testing. The patient also has botulism.

The patient starts having seizures after his infections are treated and the tests show he‘s not immunocompromised. House still thinks it is drugs trapped in his fat cells and his recent weight loss would release them back into his blood stream. They decide to sweat the patient. The patient says the last time he was high was when the police came to tell him about his parent's death. The patient once again has a seizure, but there were no drugs in his blood. House swaps his cane for another patient’s and tosses his sling away. House tells Foreman to scan the patient’s brain again.

Cameron also refuses to prescribe Vicodin to House. House confronts her about her fear of Tritter. Cameron gives him a PMS remedy.

The team does the brain scan. The patient is worrying about his siblings. They find growths all over the patient’s brain which appears to be tumors. The only treatment is radiation therapy, which will destroy his immune system. House thinks it might be a fungal infection. He orders a brain biopsy. House uses the last of his Vicodin.

House goes to Cuddy for the Vicodin. She realizes that his team said no. She agrees to prescribe the Vicodin because if she cuts him off, the cops will think he didn't need them. She then notices his sore shoulder and tells him it might be psychosomatic.

The biopsy shows a fungus, aspergillus. House thinks the cause might be a genetic disorder triggered by the stress caused by the death of the patient‘s parents. Wilson comes for Cameron to write his prescriptions, but House refuses to let her go. House decides to give the patient four diseases to rule out three of the conditions he doesn't have. Although the test is risky (it's not FDA approved), House points out to the patient that he will probably die if he doesn't undertake it.

After a few hours, the patient starts coughing. Later he has trouble breathing. This shows he has chronic granulomatous disease.

Foreman and House discuss the patient's decision and motives. House decides to test the patient's good faith by telling him there is another compatible donor. The patient refuses again, and House figures it is because if he remains sick, he won't have to care for his siblings anymore. The patient knows his siblings need him, but he also realizes he is too young to act as their father.

House goes to see Wilson, who is in the process of shutting down his practice. He is frustrated that House won't do anything and even tells him to get out of his office. He tells House that his shoulder pain is psychosomatic from his guilt about what he is doing to Wilson. Wilson realizes that House doesn't really care about what happens to him.

The patient tells his siblings that he can't take care of them anymore. The sister confronts Foreman about his promise to make her brother better. Foreman figures the patient will eventually agree to the transplant because he will miss his siblings. The patient doesn't think that he will do that.

House passes Wilson on his way home. He leaves without speaking to Wilson.

Chronic granulamatous disease is very rare, affecting about 1 in every 200,000 Americans.

Retrieved from "https://house.fandom.com/wiki/Whac-A-Mole?oldid=56747"
Community content is available under CC-BY-SA unless otherwise noted.